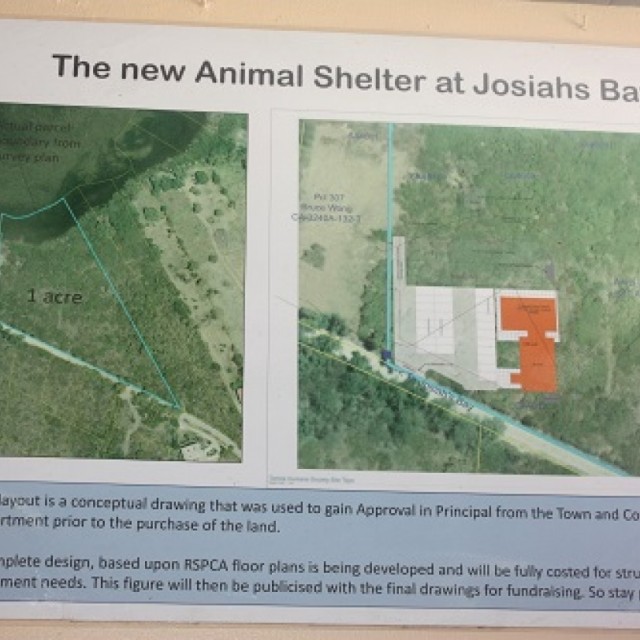 Manager at the BVI Humane Society Vijay Bissoondatt, is very excited after the non-profit organisation finally purchased an acre of land at Josiah’s Bay to relocate the animal Shelter.

The land which was purchased last month was made possible from years of fundraising and contribution from the wider community.

According to Bissoondatt, the ‘Paws For A Cause’ auction held in May, was touted as a success after generating approximately $45,000.

While the organisation seemingly made it over one hurdle, they are now faced with the task of soliciting additional funds to construct the new facility which could take many years to accomplish.

“The ground breaking is scheduled for some time next year, we are unable to say at this point because we are broke now that the land is purchased. The owner Tesa Gunter, passed away four months ago and it was always her dream to see the shelter relocated. Unfortunately she will not be around for that day but the shelter will be named in her honour,” Bissoondatt noted.

The devoted animal lover who has been with the shelter for the past 17 years, said the small dilapidated structure located at Johnson’s Ghut is arranged to accommodate 20 animals but instead is presently providing and caring for 35 stray dogs and 15 cats; these animals are left on the streets or never been picked up after short term boarding.

While the facility was not built for stray-animal control and lacks proper holding facilities, Bissoondatt and volunteers provide special care for these animals similar to those that are being paid to board. Operating on meager finances, according to the manager, government pays absolutely no attention to their cry for assistance.

“We get no aid at all from the government despite numerous pleas. We depend on fundraisers and donation from the public to assist with electricity, water and other expenses. We have to fend for ourselves and it’s really, really tough”, Bisssoondatt told BVI HotPress during an interview.

Being faced with the challenges of stray animals over the years, Bissoondatt said the problem stemmed from lack of spayed dogs and stressed that dog owners should have their pet spayed in order to control the population.

“We are always over populated here. One day alone I had 18 puppies and during that week about 50 plus dogs. It’s really tough job, if dogs are spayed then we would not have such a problem. We can’t stop the strays but we can control the population”.

The shelter, which operates entirely on cash gifts and the fees charged for pet adoptions and other services, offers a number of services including: Boarding, grooming, vaccinations, worming and spay/neutering of the animal. Dog treats, shampoos and toys are also on sale.

“There is a Vet that comes in three times per week from St. John, I work very closely with her (Dr. Laura) and she also operates a clinic in West End. On Thursdays she does surgery… persons could drop their animals off at the shelter I take them there and bring them back to the shelter; if they are work during the day and don’t have time to take their animals to West End, we offer that service as well”, Bissoondatt informed.

With school now on summer holidays, children visit the facility on a daily basis to assist with doggy walks and cleaning. The building was recently given a facelift after freshly painted by a group of students from overseas (VISION) who is in the Territory undertaking voluntary work for non-profitable organisations.

The Humane Society is also fuelled by its Board of Directors, who spearheaded fundraisers among other things. On Saturdays kids visit the shelter to take advantage of the pony rides offered on the grounds, which is part of the summer activities.

Bissoondatt’s love for animals comes naturally after growing up in a big yard with live-stocks back in his homeland, Guyana. He now spends very little time away from the shelter which is in operation 365 days per year. A love that has no bounds.

“We had goats and sheep and I am always around them, so this is something I had in me from day one. I was born in it I guess,” he added with a smile.

Horses, donkey, fish, ponies, rabbits, guinea pigs, ducks are other animals you can also find at the shelter. These are very good quality animals that would make great family members for someone persons should consider going in and giving them a forever home.

Manager at the BVI Humane Society Vijay Bissoondatt, shared a joke with his canine friend that he adopted at the shelter

YOU CAN ALSO MAKE YOUR DONATION DIRECTLY TO THEM HERE.