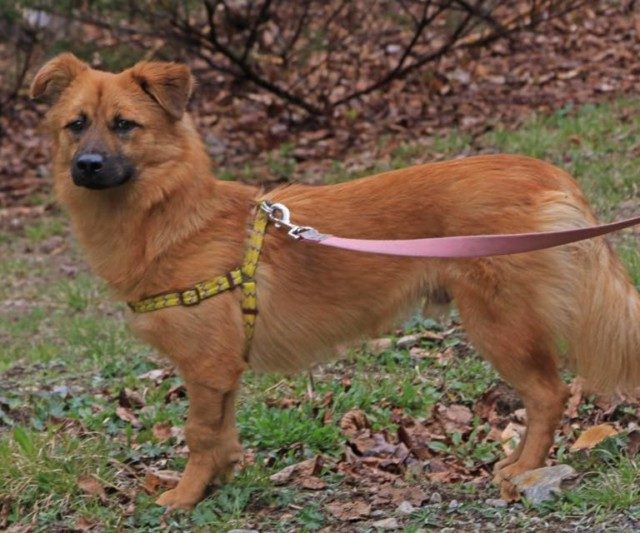 Meet Caesar who joins us all the way from China! He’s travelled a great distance to find his forever home in his new country and is a beautiful, playful guy who likes other dogs, and with the right introduction, men. Although he has only been at the rescue for a short time, he is beginning to blossom and enjoys running and playing in the yard, playing with the other dogs and winning hearts with his beautiful smile.  We’ve discovered that Caesar loves to run and would make a great jogging companion!

Caesar was rescued from a “shelter” in the North-East of China, located in the same city as a few very large dog meat slaughterhouses. Many of the dogs are brought to this, and other similar, ‘shelters’ by Buddhists, who believe that in saving the dogs from the slaughterhouse their good deed is done, regardless of whether the dogs are sick, hungry, and need further care.

As a result these shelters often have over 2000+ dogs, no food, no external shelter, and zero health care for them. The temperatures in the winter drop to -30 degrees celcius. A small independent animal rescue team in Harbin, dedicated to helping sick, injured and homeless dogs, from the slaughterhouse, neglected and other background, made contact with some volunteers who work at the ‘shelter’, in order to start taking dogs out, getting them care, and the help they need. Caesar was one of those rescued. The owner of this place does not provide anything for the dogs other than the land. The dogs are more often than not sick and dying, often dead dogs are left to rot amongst the living. The amazing local Chinese volunteers are the only thing keeping these dogs alive, taking food to them daily. The shelter boss doesn’t allow for foreigners or outsiders to come into this shelter, presumably because of the state of it, and the truth that lies there. So, the rescue group communicates directly with the volunteers, who arrange cars and transport to get these dogs to safety.

Caesar was one of the fortunate ones to get pulled from the shelter and taken to the hospital. When Caesar arrived at the hospital he had parvo virus, and almost didn’t make it. However, he pulled through and turned into a healthy, energetic puppy.

Going through so much can leave scars that aren’t visual, and as a result of such hardship in the early stages of his life, he is wary of new people, in particular men. It is believed he was abused, most likely by a male figure, and building up trust with him in important. Everyone who has spent time with Caesar can see how sweet and loving he really is. His foster mum in China adored him, and had no bad words to say about him. Once he knows you, he really does open up to you, and comes alive.

In the dog meat trade the dogs are handled horrifically, often crammed into small metal cages so tightly they cannot move. With metal prongs used clamped around their necks to move them from cage to cage. After going through this ordeal at the hands of humans, we really shouldn’t expect dogs to ever trust us again, and yet they do. Despite everything, are still capable of forgiving and loving the species that did them so much harm.

If you would be interested in adopting Caesar, please visit our website at www.cartersrescue.com and complete the adoption application. The fee for his adoption is $400 and includes neuter and vaccinations.

If you would be interested in donating funds to assist the China Dogs, please click on the donation button and indicate “china dogs”